Having increased the hardware available to run Succeed last Wednesday morning (1st October) due to the slow performance it has been interesting to look at the usage figures for the previous week (29th September – 3rd October) and compare them with the same week in 2013 (30th September – 4th October). To measure usage we will take logins per hour from the Portal (the main access route to Succeed). This excludes mobile and direct logins but should provide a reasonable basis for comparison. Also note that the figures quoted below are for one of the two applications servers (learnapp1). 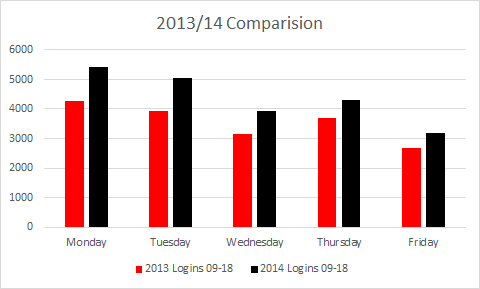 As noted in the previous posting on performance, the additional processing power on the servers (8 processor cores to 12) should help Succeed handle the increased workloads that we experienced last week and fully expect to experience in the coming week!